HOW TO FLOOD THE DATA MINE: A GUIDE TO GUMMING UP THE NSA/CIA/FBI SPYWORKS


This post is an act of civil protest. Do not respond to it or repost it lest you be put on an NSA watch list. I’m not kidding.

If you believe, as I do, that a government that spies on its own citizens is no longer a democracy, then let’s do something about it.

If you believe, as I do, that your emails, Internet searches, personal social-media posts, and phone calls should not be monitored by federal agents, then let’s do something about it.

If you believe, as I do, that the right to privacy is sacrosanct and protected by the Fourth Amendment of the Constitution, and that that right extends to our personal Internet activities and cellphone calls, then let’s do something about it.

I believe that the federal government’s recently revealed NSA, CIA, and FBI programs to collect and examine the email, Internet, and phone data of innocent American citizens are undemocratic and immoral. If you believe as I do, then let’s do something about it.

What can we do? We can gum up the spyworks. We can flood the data mine.
We can overwhelm the NSA/CIA/FBI computers with emails, Internet searches, and Web posts full of red-flag words and phrases. If hundreds of thousands of us do it, we can slow down the spy machine. If millions of us do it, the machine may grind to a halt.

It is unclear what, exactly, the NSA and its fellow intelligence agencies are doing with all the information about our emails, Internet searches, and personal posts that they have coerced from Google, Yahoo, Facebook, and the like. I suspect that they have their computers scan our emails, searches, and posts looking for red-flag words and groups of words like these: C4 plastic explosive, ammonium nitrate, LSD, Golden Gate, upstate New York City reservoir, Oak Ridge, Allah, Abd al-Hamid al-Masli, Islamic Maghreb, November 22, 2013, jihad. If I create an email or a post with those words in it (as I just have), I suspect it will draw the attention of the NSA’s computers and then of the NSA’s human spies. If millions of us create millions of such emails, it may gum up the NSA domestic spying system—or at least distract and frustrate the NSA’s human functionaries, many of whom are not even in the government but are private, government-paid spy contractors. If we cannot rid ourselves of those who are spying on us and end their spying, we can at least make their undemocratic work more difficult.
Before I go on, let me make one thing clear: I would prefer that the U.S. Congress simply defund the NSA/FBI/CIA domestic spying programs and pass a law making it illegal for any government agent, agency, or contractor to gather information about an individual American without either a) that American’s knowledge and permission or b) a warrant issued by a publicly chosen court, said warrant being based on probable cause that that American has committed or is likely to commit a crime and such court’s decisions being subject to public scrutiny at some appropriate, not-too-distant date.

I would also prefer that the federal government simply dismantle the NSA’s new 1.5 million-square-foot data-mining center in Utah, where your emails, web searches and posts—and mine—will almost certainly be scanned, and where our cellphone metadata (locations, phone numbers, times) will no doubt be logged.

Defund. Dismantle. Delegitimize. That’s what I’d prefer. But the data mine will not be dismantled, defunded, or made illegal. Congress will, in the name of fighting terrorism, give the NSA, CIA, and FBI free, secret rein to spy on us as they wish. The data-mining center will mine more and more of our private data.

President Obama, a man I admire and for whose election I have worked hard, twice (and would again), insists the NSA, CIA, and FBI are not “abusing” these domestic spying programs. The President disappoints me in this. The fact that our government is gathering information—any information—about individual innocent Americans without their knowledge or permission is in itself a form of abuse. And I fear the President is being naïve if he believes that no government-paid domestic spies are looking deeper into our private communications than they claim. The basis of my fear can be summed up in one name: J. Edgar Hoover. (Need I explain?)

Representatives of the intelligence community claim that they are not reading the emails or listening to the phone calls of innocent Americans without court permission. They are probably lying. They are, after all, known liars. We know this because when Director of National Intelligence James Clapper, the man overseeing these programs, was asked earlier this year, in testimony before Congress, whether the NSA collects data on millions of Americans, he answered, unequivocally, “No, sir.” That was a lie. Later, when caught in this lie, Clapper claimed he was merely giving the “least untruthful” answer he could. And this is the intelligence community that asks for our trust?

In the spirit of distrust, then, I offer a simple, perfectly legal way to gum up the intelligence cabal’s domestic spyworks and flood its data mine. Here are three things we can do:

With respect to emails, we can simply add, at the end of every email, following our sign-off, a list of hot-button words. I recommend a list that contains the name of one famous terrorist, one potential U.S. target, one potential terrorist weapon, and one significant date, like this: Ibrahim al Asiri, Gateway Arch, nitroglycerin, November 5, 2013.

If the mere listing of words like this makes your palms sweat, it is testimony to the paranoia at work in this country, thanks to our overreaction to imagined terrorist threats. If such a list seems, to you, to imply a threat (although it clearly does not, being no more than what an outline of a bad thriller would contain), then, instead, include your hot-button words in simple, clearly nonthreatening sentences, like this:

Ibrahim al Asiri is a terrorist bomb-maker.
The Gateway Arch is in St. Louis.
Nitroglycerin is an explosive.
November 5, 2013 is Guy Fawkes Day.

Do not send such hot-button-word emails to people whom they would upset. As an experiment, I recently sent such emails to a group of friends on a political email list I frequent. Two recipients became seriously alarmed. Both, curiously, had a history of working for the U.S. intelligence community. One claimed that by sending him emails with such word lists, I was “putting [him] in the line of fire” and “endangering [his] security.”

As for Internet searches, blog posts, and social-media posts, do more or less the same thing: Every day do at least five searches into topics that the NSA’s computers will red flag. Frequently create blog posts and Facebook posts that use the same kinds of words. Again, the names of terrorists, potential targets, and weapons will probably do the trick.

(Hot-button phone calls are a trickier area. We could make millions of innocent phone calls to numbers that might be on the NSA’s list of suspicious places and people. Examples: North London Central Mosque, in England; Amsterdam Tawheed mosque, the Netherlands; Iranian Embassy, Damascus, Syria. But calling those places is a discourtesy to those receiving the call, and expensive. I do not recommend doing that.)

The NSA, CIA, and FBI insist that they are not listening to our phone calls, reading our emails, trolling through our web searches, or examining the content of our private Facebook posts. They claim that they are doing no more than gathering “metadata” about us—not examining the specific content of our communications. I don’t believe them. But if they are telling the truth, then my call to flood the data mine will do their work no harm.

On the other hand, if they are lying, as I believe they are, then if we flood the data mine and gum up the spyworks, then perhaps we can lessen the harm they are doing to individual Americans and to our democracy in general. As for me, I suspect I may soon be on their watch list. Fine. Let them be distracted by me, a harmless old retired English teacher. It means they’ll have that much less time to spy on my fellow citizens.

An airplane is just aluminum with an education. 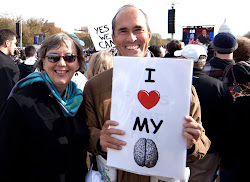 The sign I carried at the Rally to Restore Sanity in 2010 pretty much sums me up.

Ed Weathers
I'm retired from two careers: 1) as a magazine writer and editor and 2) as a college teacher. I also write another blog (see links below).